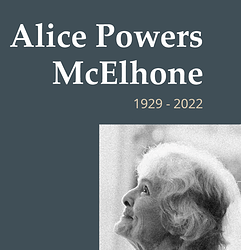 Her daughter Barbara writes, "Alice ran her publishing company for many years, wrote and played music, raised four children and enjoyed their offspring. She was whip smart and witty, and a great partner to her big brother, Willie, whom you all know more familiarly as Bill Powers.

“She was an intelligent, creative and inspired woman. She took on all the roles a woman can fill and then some: daughter, sister, wife, mother, cousin, aunt, friend. She was a kind person in the deepest sense of the word. Alice’s own many accomplishments each could have easily filled a life, yet she found time to excel in all, while also raising four children with her husband, Fritz. In the midst of her busy life, her support for her big brother, Bill Powers, was unwavering as she partnered with him to publish his books about PCT. Alice was a close companion to Bill’s wife, Mary. Together they were sounding boards for Bill, his not-so-silent partners, editors, and devoted fan club.”

An obituary in the Chicago Tribune is here.