An idea about neuroscience (2)

Regarding deriving a single general transfer function for a neuron, my opinion is that a neuron is simply a discriminator, a way to separate things on the left from things on the right, between before and after. So, inputs can change, and only at a particular situation is output produced.

This is the fundamental role of a clock signal in digital circuits. Signals arrive and change but only the state at the clock edge is switched to the output.

I guess it has something to do with time and space, a way to make things simpler. So, in at the input side of a neuron you have a million and one ways that a spike is triggered.

And the symbol (general transfer function) of a discriminator to me is simply a nonlinearity, like activation functions in ion channels and used also for all artificial neural networks.

Yet, I consider this nonlinearity the boundary between balance and imbalance, so I call it the imbalance function.

Then, there is a fundamental issue: what is the general transfer function going to be used for? To model something biological? Or to use biological concepts for nonbiological engineering? If you opt for the former, you will have to take into account sufficient details of ion channels, receptors, transmitters, dendritic features, membrane potential, etc.

But if you opt for the latter, the problem becomes simpler but also harder. It is simpler because you are going to use biological concepts for engineering something that will not have a biological substrate: that is, no cells, no metabolism, no chemical basis, no DNA., etc. Per se that is. So, you are more free to pick whatever aspect (such as the all-or-none idea, the McCulloch Pitts stuff) and then just call it bio-inspired.

The problem also becomes harder because you need to have an argument for what separates biological from nonbiological. It is easy to slap on the “bio-inspired” label, and then produce a system that does very little that can be compared to the biological. It is easy to say you have some 5 things that resemble an insect brain but then not having to, and not being able to build anything even within 10 orders of the complexity of the biological insect’s behaviour (subsumption architecture, wink, wink).

How do you take something that is made of metal, plastic and rubber, which has a battery, no need to procreate and call it “biological-based” yet without modelling a biological organism?

Funny enough, after several years of thinking about it, I believe the basis of solving such a problem is the imbalance function.

And this is not so alien to PCT, since the comparator’s reference signal provide a discriminator for the boundary error <= 0 versus error > 0. And noting that the imbalance function by itself does not implement negative feedback control. But then also realizing that the main difference between the human-driven car and the autonomous car is that most reference values move from the human brain to the car’s “brain”, and that during this process of transferring the reference signals, the imbalance function will always be at the bottom; it does not disappear by adding (get replaced by) the negative-feedback control loop. 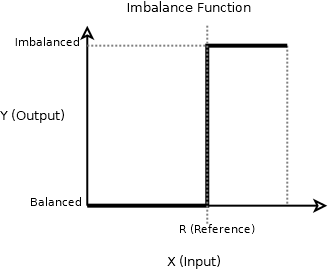 An idea about neuroscience CSG2011

Hi, Henry -- Hi Bill, It's probably not realistic to derive a general transfer function for a neuron, because different types of neurons differ mainly in the receptors and channels they express and, as a consequence, cannot possibly have the same transfer function. BP: Probably I'm asking too much -- yes, it's difficult to get measurements in vivo, especially the subtle kind I suspect that we need to measure: processes in the dendrites due to diffusion and mutual interactions of inputs. …

When skin temperature falls below a set-point, mammals experience “cold in the skin” and exhibit heat-seeking behaviors for error correction. Physiological thermostats should perform the behavioral thermoregulation, and it is important to identify the thermostats. A classical model of the sensory system states that thermoreceptors (e.g., thermoTRPs) in skin nerve endings are sensors that transform temperature into the firing rate codes that are sent to the brain, where the codes are decoded as “cold” by a labeled line theory. However, the view that the temperature code is transformed into “cold” (not temperature) is conflicting. Another model states that a thermostat exists in the brain based on the view that a skin thermo-receptor is a sensor. However, because animals have no knowledge of the principle of temperature measurement, the brain is unable to measure skin temperature with a thermometer calibrated based on a code table of each sensor in the skin. Thus, these old models cannot identify the thermostats. We have proposed a new model in which temperature receptors in a nerve ending are molecules of the thermostats. When skin temperature falls below a set-point, these molecules as a whole induce impulses as command signals sent to the brain, where these impulses activate their target neurons for “cold” and heat-seeking behaviors for error correction. Our study challenges the famous models that sensory receptor is a sensor and the brain is a code processor.

The authors of this 2015 article have “proposed that these neurons act as thermostats (not thermosensors), which have their threshold temperatures as set-points for regulation of the core temperature [and f]rom their threshold responses, … have proposed that thermoreceptors are thermostat molecules … and the mechanism of temperature comparison is phase transition at the set-point. These receptors are non-selective cation channels…”

No flip-flop or polyflop necessary at this level, Martin.

Matti, what has the follow-up been in the five years since this was published?