One popular way to describe the difference between PCT and other theories of behavior is to say that while other theories hold that perception controls behavior PCT states that behavior controls perception. I’m sure I have described PCT in this way myself at one time or another, as has Bill Powers. But I now think this way of describing PCT can be misleading in a way that “pulls a red herring across the path of progress” in the study of living control systems (the subject of my recent book on the topic).

The phrase “behavior controls perception” is problematic because it suggests that PCT says that the observable behavior of organisms controls controls their perceptions, which are unobservable. The problem with this is that nearly all of the observable behavior of organisms involves the control of perceptions; behavior itself IS the control of perception. This is the point I tried to make in my talk a couple years ago at a meeting of the Cybernetic Society. The talk is available here. The animation in that talk shows that the behavior we see as “sipping tea” is actually the visible “side effect” of the process of controlling a perception of the position of the cup relative to a varying reference.

The means used to control this perception are the actor’s muscle forces that affect the position of the cup. These muscle forces could be seen as “behaviors that control the perceptions” – in this case the perceptions involved in sipping tea" – but I think this is still a problem since the muscle forces themselves are controlled perceptions. So, I think that it’s better to refer to the means used to control perceptions as “actions” or “outputs” and reserve the term “behavior” to refer to informal description of what we see organisms doing, such as “lifting a cup”, “sipping tea” or “inciting a riot”. The term “behavior” refers to what an observer perception of what an organism is doing.

That’s a nice course correction, mindful of the audience.

I think you are correctly emphasising a generic issue in talking about feedback systems, in which it is simultaneously true that no part of the loop causes what happens in another part and that every part of the loop cause what happens in every other part. It’s hard to get across to a novice the truth of this apparent contradiction in a language based on Noun uses Verb to act on Noun as the guide to communicating what you are trying to get across.

We don’t have a good language to expose the helical (through time) aspect of feedback loops. The language problem gets even more difficult when we deal with complicated feedback structures such as the perceptual control hierarchy. To talk about and to study the controlled variable is fine, but what controls it — the entire loop, not any one aspect such as the error, the output, or the perceptual function? Those are unitary entities about which it is easy to talk. But for everyday purposes, I think the disparity in energy usage between the perceptual side and the action side is adequate justification for Bill’s title “Behaviour: the Control of Perception”, inaccurate in detail though it may be.

This is not quite my point. My point is that what we typically call a “behavior” is a visible aspect of control: a controlled perception (controlled variable) and/or the action that controls it. A good example is “bat navigation” or “echolocation”. The behavior pointed to by these terms is a bat flying about, avoiding obstacles and catching prey.

Both obstacle avoidance and prey catching hint at one of the variables bats control: their distance from objects and from prey. We now know that the perceptual analog of this distance is the time delay between the sounds of ultra-high frequency clicks produced by the bat itself and the echoes from these clicks.

This controlled variable can be “seen” in spectrographic data produced by special sensing equipment, as shown here: 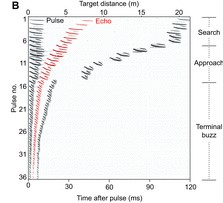 The time between the bat’s click (pulse) and the echo return from the pulse is a perceptual analog of the physical distance to the target. It appears to be a controlled variable that is being brought to a reference of 0 delay.

But what is also seen is the means or actions used to control this variable, which in this case is the flight of the bat. The bat reduces the delay between pulse and echo by flying toward the source of the echo. But flying itself involves control of many variables, such as the attitude and velocity of its body. So even when we are looking at behavior that is the means used to control a variable, we are looking at a controlled variable.