Horseshoe crabs have been evolutionarily stable for a long time. They are the true bluebloods among our distant relatives. Actually arthropods (think spiders and scorpions) rather than crabs.

“Horseshoe crabs use hemocyanin to carry oxygen through their blood. Because of the copper present in hemocyanin, their blood is blue. … Amebocytes from the blood of L. polyphemus are used to make Limulus amebocyte lysate (LAL), which is used for the detection of bacterial endotoxins in medical applications.”
(From Wikipedia.)

“Since horseshoe crabs have a hard shell, they must molt to grow. Horseshoe crabs … molt at least six times in their first year of life and about 18 times before they reach sexual maturity. Females are generally larger than males and may molt more than males to reach the larger size. Once crabs are sexually mature, which takes at least nine years, they won’t shed their shells again.”
The Horseshoe Crab Limulus polyphemus: A Living Fossil

After molting, they bury themselves in sand until the new shell solidifies.

Day before yesterday, walking on the beach, I saw many molted shells of immature crabs (covered bumpily with barnacles and slipper shells) and a few large ones (quite bald, maybe because they live in deeper water) in the wrack of an intermediate high tide, the next after the full moon line. After some text exchanges with my naturalist daughter Katrina, now living over the water in Woods Hole, she sent me this fascinating video link: 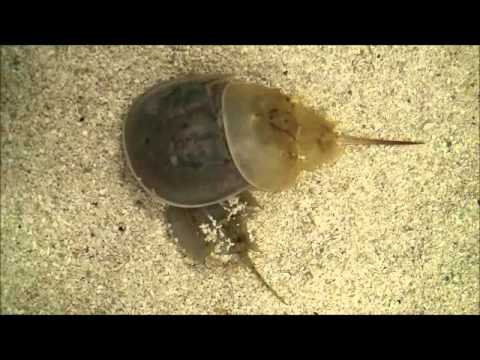 The larger and older one is molting, the smaller and younger one assists in pulling off its molted shell.

This is very cool! Social cooperation among evolutionarily ancient critters that are said normally not to interact at all. But of course there are very probably actions that affect sensory inputs that nobody has looked for. This interaction between crabs of different ages and stages of development suggests that horseshoe crabs might be in ‘conversation’ through their watery medium and the sand under their claws all the time.