What is Collective Control and Why is it Important? A Basic Definition

WHAT IS COLLECTIVE CONTROL AND WHY IS IT IMPORTANT? 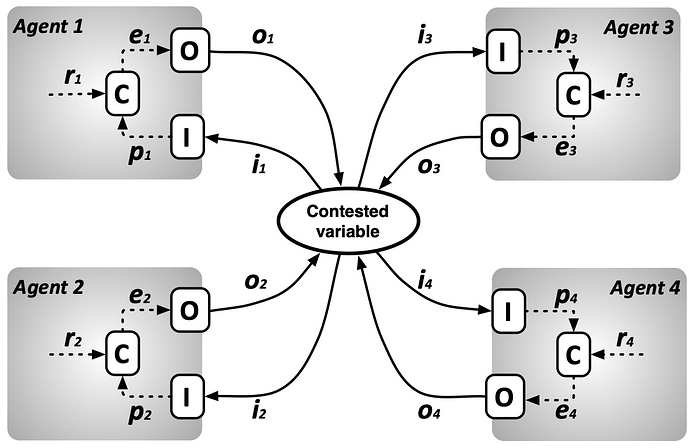 In the diagram, the shaded areas indicate the control agents, and the white space, their shared physical environment. Boxes labeled I , C , and O stand for the input , comparator , and output functions of these control loops. Small letters p , r , e , o , and i stand for the perceptual signal , reference signal , error signal , output quantity , and input quantity , respectively. The environmental variable in the middle of the diagram is labeled a contested variable because the agents may have different reference values for their perception of it (see my comments on conflict and cooperation below). Although the control systems in the diagram are rotated 90 degrees from the standard PCT diagram of a control loop, they are in other respects exactly the same.

My explanations and analysis in this post refer conceptually to all forms of Collective Control, but in detail only to the most basic form: a one-dimensional environmental variable whose perceptual values are controlled by two or more independent controllers. As I will describe below, when we apply these ideas to more complex forms of collective control, the analysis also gets more complicated, but the same principles continue to apply.

When I speak of control agents, I am referring to any entity that is organized as a control system and thus can control its own perceptual input, including human beings, other living things, neural circuits organized as control systems, or even machines designed as servomechanisms. Obviously, in order for collective control to occur, the control agents that act together must all be able to perceive and control their perceptions of the same aspects of an environment that they share, in the sense that all of the controllers can both perceive and act upon those aspects of their common environment.

At least in the case of living organisms, evolution has insured that their perceptions are reasonably well correlated with the corresponding environmental variables that they perceive, or they simply could not survive long enough to procreate. The actions of control agents, then, create regions of relative stability in their physical environment, because the actions of agents to control their own perceptions also reduce the variability of the environmental variables that correlate with these controlled perceptions.

Because all of the forces exerted by the control agents will tend to stabilize that environmental variable against other kinds of disturbances, the end result of collective control will be that the environmental variable has greater stability than would be the case if only a single agent were attempting to control its own perception of the variable.

In short, the collective actions of control agents can stabilize portions of their common environment more effectively than any single agent would be capable of doing. This increased stabilization of variables in a shared environment, collectively accomplished, is what makes collective control such an important phenomenon for us to understand.