Here is an unforeseen sensory input path. Not only the perception, but also the manner of creating it is different from e.g. light, sound, or pressure. Instead of a peripheral cell firing at a rate proportional to the effective environmental input, the sensor cell sends one neurotransmitter or another to the vagus nerve, where the differentiation of one neural signal vs. another is made accordingly.

This research is out of Duke, Henry Yin’s university.

Originally termed enteroendrocrine cells because of their ability to secrete hormones, specialized neuropod cells can communicate with neurons via rapid synaptic connections and are distributed throughout the lining of the upper gut. In addition to producing relatively slow-acting hormone signals, the Bohórquez research team has shown that these cells also produce fast-acting neurotransmitter signals that reach the vagus nerve and then the brain within milliseconds.

Bohórquez said his group’s latest findings further show that neuropods are sensory cells of the nervous system just like taste buds in the tongue or the retinal cone cells in the eye that help us see colors.

“These cells work just like the retinal cone cells that that are able to sense the wavelength of light,” Bohórquez said. “They sense traces of sugar versus sweetener and then they release different neurotransmitters that go into different cells in the vagus nerve, and ultimately, the animal knows ‘this is sugar’ or ‘this is sweetener.’” 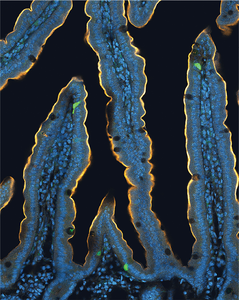 Your gut senses the difference between real sugar and artificial sweetener

Why do mice without tastebuds still prefer real sugar to the fake stuff? “We’ve identified the cells that make us eat sugar, and they are in the gut,” said Duke researcher Diego Bohórquez. Specialized cells in the upper gut send different signals to...

I wonder what other kinds of sensory input we do not yet recognize.