An opinion of the brain about sensations in the body

My understanding of emotion begins with Bill’s discussion of two branches of the perceptual control hierarchy, the cognitive and the somatic. (See the topic “Bill’s PCT model of emotion”.) Paul MacLean’s ‘triune brain’ model (1960) is oversimplified but still has merit as an organizing schematic. Emotions are created in the cognitive hierarchy out of perceived somatic sensations in the body by means of reciprocal traffic between limbic systems (amygdalae, hypothalamus, hippocampal complex, and cingulate cortex) and higher cortical functions. For example (and quoting now from my chapter in the forthcoming Handbook of Perceptual Control Theory a.k.a. LCS IV):

Lieberman et al. (2007) report that, when a subject talks about emotions, activity in the right ventrolateral prefrontal cortex (RVLPFC) increases while activity in the amygdala decreases. If this effect can be replicated reliably, it suggests a basis for certain kinds of therapeutic interventions in emotionally challenging situations, and would be an inherent (unintended) effect of the Method of Levels.

It is well known that limbic functions construct a categorization of perceptual input much more rapidly than the higher cortical functions. The best known of these categories–fight, flee, and freeze–all prepare the body for action in the same way, releasing adrenalin, elevating heart rate, and so on, and each has its correspondent cognitive interpretations as emotions. As others here have commented, the range or field of emotions includes much broader variety than these ‘negative’ emotions in the fear and anger spectrum.

At every level, and in both branches of the hierarchy, each of these perceptions enters more than one perceptual input function, and wherever reference input differs from that input error signals branch downward calling for control of additional perceptual input signals. This is a form of what has been called spreading activation.

By such processes, then, cortical opinions about present experience are built up from the initial limbic categorizations of perceptual inputs from the environment, the somal perceptions associated with autonomic preparation for action, and the slower cortical processing of those same environmental inputs into potentially controllable perceptions at higher levels of the cortical hierarchy.

It is important to bear in mind that memory is located at every synapse, (Certain areas, as in the left temporal lobe, are important in the reciprocal neural traffic that consolidates long-term memories, and stimulation of reference inputs induces imagined control of perceptual input which may be reported as memory, but this is no longer held to be evidence of modular localization of memory.) Perception and control in the somatic hierarchy, and spreading activation, is the basis for the assertion by workers in some fields of health intervention that memories are stored throughout the body.

The Hinayana form of Vipassana meditation as taught by S.N. Goenka (who brought Buddhism from Burma back to India after a 3000 year absence) is a practice of bringing awareness deliberately to somal perceptions, moving awareness from one small area of the body to another in a systematic way. In this practice, the reciprocal relationship between sensation, memory, imagination, and perceptions in the cognitive and motor control hierarchy becomes quite evident to the discerning mind. And in a way analogous perhaps to the role of observational narrative (per the above reference), it becomes transparently evident over time how anchoring attention in immediate somal perceptions and allowing the products of memory and imagination to play by without further pursuit attenuates the process of amplifying somal and limbic activity into disturbances of imagined control in the cognitive hierarchy and perceptions which we experience as emotions.

Without such interventions, in ordinary experience our attention is on cognitive perceptions which we project as environmental realities, and this reciprocal neural activation functions effectively as positive feedback until a real or imagined disturbance of control in the cognitive hierarchy, with a perception of emotion as part of that complex perception, becomes the object of our attention. As is well known, the disturbance, the attribution of the source of disturbance, and indeed the controlled perception itself may be entirely imaginary and projected into the environment as an ‘explanation’ within the cognitive hierarchy (cortical functions of the brain) of the emotion and the somal perceptions which have arisen and been amplified by the above feedback processes.

These processes, which I have advanced as a way to account for emotions in PCT, can be seen perhaps even more directly in the construction of a perception of pain as the brain’s opinion about the state of some part of the body. There is a nice lay overview with references here: 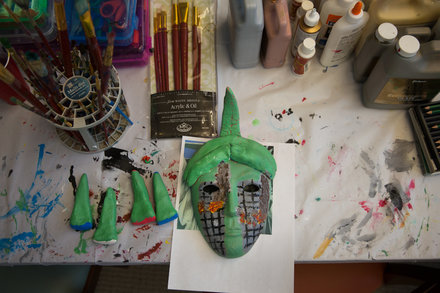 If ‘Pain Is an Opinion,’ There Are Ways to Change Your Mind

All pain is real, but it’s also true that it’s “made by the brain” and that we can exert some control over it.