This was a tangent to another topic.

there’s a nice description in B:CP of how this might be implemented with neural currents in the nervous system. It’s in Figure 3.10: 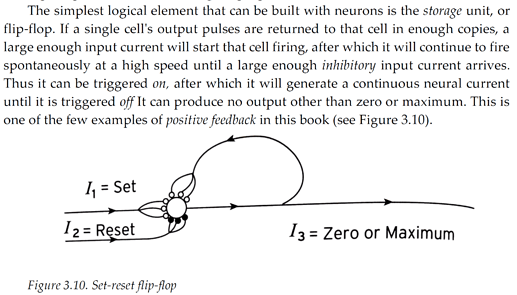 A flip-flop switches between neural firing on one neural path and neural firing on another. The description on the Wikipedia page also talks of 1 vs 0, but the diagram presented there (and below) seems to contradict that description. In it, two outputs (the nearest labels are Q1 and Q2) alternate between 1=‘on’ and 0=‘off’, such that when one is ‘on’ the other is ‘off’. 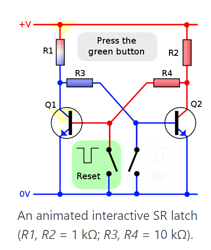 Although they could not come to commensurate terms of discussion, this 1997 exchange between Bill and Martin has much of value. (The beginning of it was under a different subject line that I did not locate, but it could turn up in a search on ‘GFF’ or ‘polyflop’ or, for the widest net, ‘category’.) The mutual frustration would have been reduced by implementing ideas in computer simulations. Rupert did this two decades later, in this 2017 exchange with Martin.

Rupert, what is the status of the graphical PCT development environment?

Rupert, what is the status of the graphical PCT development environment?

There is the python library I presented at the Gibraltar conference, pct · PyPI.

It is semi-graphical, in that you can create hierarchies programmatically and then display them in a network diagram.